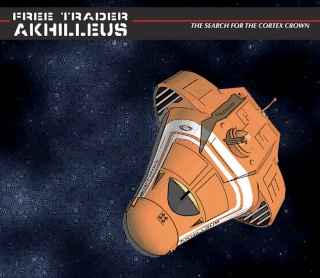 Free Trader Achilles: The Search for the Cortex Crown

Free Trader Achilles: The Search for the Cortex Crown

In the late summer of 1102, the six-person crew of the Free Trader Achilles are pulled from thier routine and mundane regional trade jobs, and contracted to a special mission by the Duke of District 268. Imperial Intelligence agents within the Zhodani Consulate have reported contact with an artifact of tremendous power and unknown origin. A device rumored to be able to probe the minds of great masses of people for some unkown purpose. In the wrong hands such a device could be used to muster forces strong enough to sweep the galaxy under the tyrrany of a unified mind...

... the survivng agent called it the Cortex Crown before she died...

The Duke has set the path. The ship is to be armed and provisioned for the expedition, It will depart Mertactor when ready, and proceed Spinward through Foreven, The Far Frontiers, yiklerdanzh, and beyond into the uncharted Tsadra sector, where the Cortex Crown is said to be hidden. Intelligence has also shown that the Consulate has heard of this effort, and will undoubtably be sending a crack counter-team to defeat the effort and recover the Crown for themselves.

The Crew of the Achilles has one mission. Recover the Cortex Crown and return with it to Mertactor at all costs.

Love it, big story arc , a race against time, lots of mystery, strange artifact, our opposing team of Zho's in the background, unexplored regions. On to a winner here I think. Good work.

It would be good to have an intro setup very similar to Dan's initial thoughts where it starts with danger/attack & action stations where each character is introduced in each panel, whether this then leads in to the initial contact by the Duke's men or this maybe partway into the story followed by a flashback sequence of how they got into such a sticky situation.

Baron Saarthuran wrote:...proceed Spinward through Foreven, The Far Frontiers, yiklerdanzh, and beyond into the uncharted Tsadra sector.

So, are we gonna need something with longer legs than a Free Trader? Maybe a Far Trader conversion at least? It's doable with the basic Beowulf, I probably even have the variant around here somewhere. Or do we want to move to the Marava class? Or The Baron's 300ton (iirc) J3 trader from a while back. I loved those deckplans, even if I had to spin a variant

Welcome back from the sickbed Dan.
You are right , I am up for moving up to a Marava or similar.


far-trader wrote: Or The Baron's 300ton (iirc) J3 trader from a while back. I loved those deckplans, even if I had to spin a variant

I was thinking something along the lines of a Free Trader with a Modified Jump Extension Module. A back end sort of superstructure clamp on drive and fuel pod that brings the Ship's range up to J-3 or even J-4. I think J-3 might be enough.

Initial thoughts on the module:

It could add extra range
It could add a divergent look from typical free trader
Extra tonnage space could also be used to hold a ship vehicle.

Either that, or hustling up external tanks can be a recurring problem for the crew. They have to win them at cards, fight for them, steal them, etc...

Baron Saarthuran wrote:
Either that, or hustling up external tanks can be a recurring problem for the crew.

Ah, the 'Achilles heel'.
This is good, very good, the divergent look & ships vehicle really appeals & the remote base up in orbit is great for splitting the storyline & crew into two, etc. It also makes our ship that little bit different/special.
I'll have a go at designing this straight away

Boy I thought you guys would be going full steam by now.

Maybe try illos of a Typical Traveller Adventure before saving the universe ?

This way you can deal with showing
the basics as test, (starport backgrounds, a few characters, etc). Find out what's interesting in a typical cartoon
set. Where your limits are. Then move to The Ultimate Story.

The only problem with the Cortex Crown might be that it's a Treasure Hunt, and one team seems to know something
the others don't, but why and how ? How does a noble 3 sectors away know about "buried treasure" in some distant
sector ? Same with the Zhodani. How do they know about the noble's proposed expedition and how to ambush it ?

So background on the expedition might be necessary before you fuel up the starship and mount an expedition. It might
be the discovery of some sort of fact/artifact related to the Cortex Crown (CC) that is uncovered and points to the
main prize. This makes news. Zhodani agents happen to find out. Mertactor & D-268 is administered by Glisten IIRC. It could be the Zhodani have a "trade mission" there and word leaks back to them. They've been hunting for this thing for a few centuries
but have been looking in the wrong subsector. By the time they can react and move, the expedition has already
been mounted and gone. It then becomes a race (or a game of catch up) as the Zhodani's need to find the Achilleus
and deal with it.

The Double Agent is always good. The Zhodani can't catch the Achilleus due to inconvenient circumstances (like navy
ships in the area or something else) however they can place someone on board. This in the form of a High Passage
traveller or possibly a robot.

Or the Cortex Crown could involve the old: "we must unite to find the treasure" ploy that forces the two to work together,
in some way/shape/form. This can lead to betrayal, one upmanship, etc, etc. Neither team can make it on their own and
must ally themselves with their opposite.

The other thing is if the Achilleus is going to be featured prominently, it needs to have a reason for being there, meaning
that it's not just another starship who happened to be passing by. A little customization might be a good idea (J-2 ability or
the fact she carries collapsible tanks in her hold for extra jump capacity). She happens to have a military-grade sensor and
comm package meaning she can detect Zhodani military comm signals. Since they're heading towards that part of space
and good translation program will be necessary too.

What about the ship's patron ? Does he/she need to be detailed ? Is the noble searching for Treasure the whole reason of
this story ? Did one of the crew uncover it but wasn't rich enough and approached the noble in some way ? If the crewman
is the real reason behind the expedition it might be better.

Does that make sense ?

Gadrin wrote:Boy I thought you guys would be going full steam by now.

All my fault I'm afraid, I'm back on the comic now, apologies - RL has been a bastard for a while so I've been a bit neglectful.
Am re-doing the initial panels and will post very soon.

Gadrin you have a few good points which I reckon we are probably covering already.

It mightbe the discovery of some sort of fact/artifact related to the Cortex Crown (CC) that is uncovered and points to the
main prize.


We have that in the opening pages.


This is covered too.

The Double Agent is always good.


We have this also. Looking good

This is pretty encouraging if Gadrin has come up with this from a fresh view and is having the same thoughts that we have had.
Anyway back to work...

Ahh, we're doing ok. Nobody has any fatal illnesses do they? We have time to develop this comic and let it run for years if we want. Once we get into a pattern of working, and get set up, it'll be like "Oh yeah, time to do the comic." As far as the scale of it? Why not? It still follows a simple plot, and we can skip ahead or around as much as we want.

The opening act is always the hardest. Plus there has been a blizzard of activity on all fronts, In Game life and in Real Life. On my end, I had to make time and punch out the Cortex Crown intro in between designing a few waterparks, baby ultrasounds, and moving everything I own, so I think we're doing all right considering.

I also think we are doing alright considering that we have never met face to face. Doing a project like this is tough with a bunch of people in a room doing it, to say nothing for people on the web doing it. MY only regret is not having more time to hit it harder at the moment, but that will change very soon.

Plus, as long as Beech is in, I am in. I respect his work, and am glad to see that already it is getting recognized and he is getting requests. That is a good sign for him as an artist, and for FTA:SCC as a Comic. Traveller needs a Comic. So far, ours looks pretty badass.

It is so much easier when everyone on the team rocks. But that's just my daily dose of cheese eating.

Well off for a bit, will try and steal some time when I can but no promises....

God, I miss having a Net connect says the Junkie.

Keep the faith and I will check ya later, dudes.

Thanks Baron, I agree with all you say there, once we get into a routine the productivity will increase big time.
I really do want to make a go of this and as a team I think we are doing pretty damn well

My bad, I haven't heard/seen anything so I thought maybe things got dropped. Most of the posts were months old.

Good to hear you're still boogeying

As for you, Gadrin, we need you to get to work on the Zhodani team! We need your help tweaking it out and getting it polished for production. You have a long intro time (I think) before the first Zho pages come up, and all you need do is think of cool stuff and write it down. The data part is easy, but who are these people?

There are many design issues that are running parallel with the main group that have to be fleshed out. The Zhos have thier own plotline going on in the background. They are not just badguys that pop up every now and again. They want that Crown too. For the Consulate.